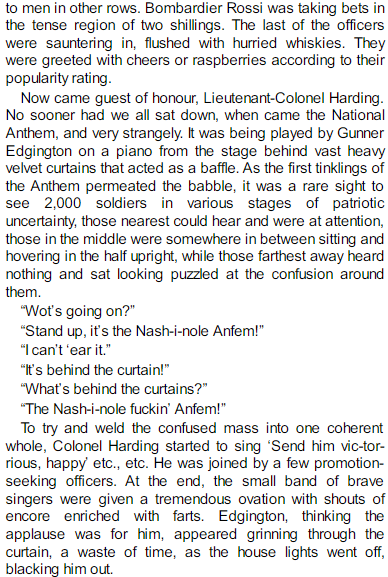 From "Adolf Hitler: my part in his downfall" by Spike Milligan. This is volume 1, things are still funny, no-one has died. Well, no-one he knows, anyway.

Which seems a rather apt lead-in to Trump; you may as well get your Godwins in early and accurately1.

So, is it a nash-in-ole fuckin' emergency? No, of course it isn't. The idea is absurd; no right-thinking person could possibly agree. Only in a nation with debased political discourse could such an idea even be briefly entertained.

However, as in all such things, Trump has people running cover for him. For example:

No. None of these things are national emergencies. They are all problems that you would like solved, but they aren't emergencies. And pretending that they are just provides cover for Trump and his fanbois.

I'm currently reading The Federalist Papers, which is largely Madison selling the proposed constitution by pointing out the numerous checks and balances. He isn't too bothered by the powers of what he calls the "Chief Magistrate"2, relying on the power of Congress (ironically, of the purse) to restrain him if necessary; and of course underlying all is the will of the people.


As a couple of comments have suggested, and as TF says more explicitly, it is possible to see this as Congress deliberately abdicating responsibility. This, I think, is something Madison didn't consider: the constitution depends on each branch being jealous of its rights.


1. Hint: you can't invoke Godwin to mean "I don't like that" without looking silly.

2. I think he uses the term in a deliberate effort to play down the role. No nobility no king was a big thing at the time.


* CHAPTER 34—NATIONAL EMERGENCIES
* There Is No National Emergency on the Border, Mr. President by ALEX NOWRASTEH
* Speaking of comedy, there's What would happen to Earth’s Climate and Weather if we had no Moon? at WUWT - but you may prefer We Like The Moon.
* ECONOMISTS’ STATEMENT ON CARBON DIVIDENDS - The Largest Public Statement of Economists in History
* California high-speed rail and the American infrastructure tragedy, explained; or Lessons from the Golden State by Scott Sumner; or Making Tracks in the US by Eli; or CA HSR, RIP (kind of) by Brian.
* Deadlock and Partisan Bitterness - by Bryan Caplan
* The Dangers of Government by Executive - Volckh
* Democracy in Decline? by Loren E. Lomasky
* Apology for a Trainwreck by Bryan Caplan - poverty and sociology
* Is Climate Change like Diabetes or an Asteroid? - Nordhaus
* The Props assist the House by Emily Dickinson - TF
Posted by William M. Connolley at 10:50 am

The MSM isn't providing cover. If this ends up in SCOTUS and they pass it in a 5-4 decision (or some such) expect to see all form of 'so called' Nash-in-nole Emergence-ies put forth.

You forgot the 2nd amendment and the they took our guns, due to school shootings (or some such).

Any POTUS could call anything a "Nash-in-nole Emergence-y" (e. g. make it up in the 1st place, as Trumpkin did here with his border shenanigans).

So no cover. Period. Full stop, Just citing examples that some other POTUS might try in the future. The situation borders on the absurd. So actually, just another normal day in Trunpkinland. :/

The USA is seriously fucked up (IMHO with or without Trunokin).

> the purpose of saying [X] is a national emergency" is to indicate to Republicans that this is a dangerous precedent to set... it may come back to haunt them

That may well be one of the things they are thinking. But it also feels and sounds like "well, if you won't play by the rules, then we won't either". Which is a very natural human desire for revenge, or even fair play. But unfortunately it also indicates no real desire to adhere to the rules, no sense of principle; and it legitimises Trump's rule-breaking. Because if the answer is "well you've broken the rules so we will in our turn" then Trump's response is going to be: "fine". Well, obviously his actual response would be less coherent.

This is the sense in which they are running cover for him. The correct response is that breaking the rules isn't fine, not to promise to do it yourself.

Over the last few decades, Presidents of every stripe have combined to declare about 60 national emergencies. This is one of the phoniest, but Congress has never wavered in its intention to abdicate responsibility for anything contentious. Let the Prez take the blame! Wotta motto.

> The correct response is that breaking the rules isn't fine, not to promise to do it yourself.

Fear that the other party is going to screw you over is a motivating force in US politics.

Came across some interesting context that is muddying the picture though: An ABC article from 2018 complains that Trump did not declare the opioid epidemic a "national emergency" but only a "public health emergency", as the former designation would have opened up additional funds.
https://abcnews.go.com/Politics/white-house-hosts-opioids-summit-controversies-loom/story?id=53441788
But the opioid crisis, tragic as it is, has been burning for decades. So clearly there is an appetite outside of Trumpism to use national emergencies for policy ends (and, if I had been asked in March 2018 what I thought, I probably would have been fine with using a national emergency designation to open funds for public health).

Most are foreign policy by presidential decree, especially since they are renewed yearly. Congress seems OK with that. Trump's declaration is not as much of a red line as I'd like, though it is different because instead of just acting in the absence of Congress, he's directly flaunting the will of Congress.

It turns out what they were chanting at Trump Rallies was "Who's going to pay for the wall … The Military."

Climate change may well cause emergencies, but emergencies are urgent problems, needing treatment now or at least very soon, and climate change isn't an urgent problem. A decade of delay isn't fatal, good thing as we have been mostly delaying since 1985, or whatever date you want to give to the start of good enough understanding of the problem.

The limited actions we have taken have been effective in laying the groundwork for future larger actions. Subsidizing solar when solar is 0.001% of energy production is thousands of times cheaper than a carbon tax, and far more effective than a carbon at reducing the cost of solar to make solar power more competitive. So perhaps "delaying" in the previous paragraph is not fair.

"The correct response is that breaking the rules isn't fine, not to promise to do it yourself."

Only James Cameron can save the USA now.

Did I mention that my 'so called' country, the USofA, kind of really sucks? I'm pretty sure I've said so many a time.

The point of Democrat and some Republican warnings is not a threat to declare bogus emergencies to raid the purse for other improper purposes.

The point being made by objection to this 'emergency' declaration is that if Trump succeeds before his stacked courts then the meaning of an emergency will turn out to be wide. Once that has happened, the principle can't be put back in its box. Rather, the principle has turned out to be something wider than we had thought (and, for those who set up the Act, intended).

If the principle really is so wide, other Presidents using it for other things simply won't be breaking the rules. And this isn't a threat that 'if you break the rules so will we'. It's a warning that if you establish the rule to be so broad you do so for everyone and every purpose.

Get rid of 'blue slips', and they're gone. Limit the filibuster rule, and it's limited. Pointing that out is not 'if you break the rules we will too'. It's 'if you destroy the rule then it's gone'.

"* Speaking of comedy, there's What would happen to Earth’s Climate and Weather if we had no Moon? at WUWT -"

As Watts is , no surprise , channelling a question from another crap blog, he misses the most scientifically interesting answer: There would be no atmospheric tides driven by the moon.

The leading authority on consequences for the global circulation is, of course ,Watt's hero Dick Lindzen.

It's been Crickets for two weeks now.

New "Nash-in-nole Emergence-y" or lowering the bar even further (Trumpkin doesn't believe in absolute zero, se he will forever try to lower the bar below absolute zero).

Remember that you heard it here 1st. :/

Is climate change a threat to national security?
https://www.washingtonpost.com/national/health-science/white-house-readies-panel-to-assess-if-climate-change-poses-a-national-security-threat/2019/02/19/ccc8b29e-3396-11e9-af5b-b51b7ff322e9_story.html?noredirect=on&utm_term=.25fd9341515d