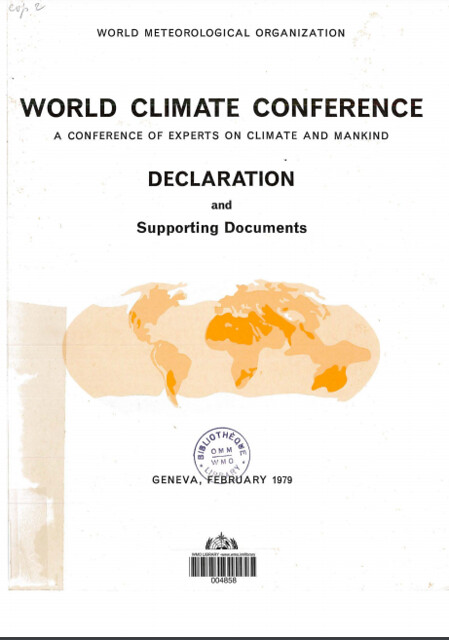 Some rather over-excitable people (h/t ATTP) warn us of World Scientists’ Warning of a Climate Emergency. If I read enough of it I might discover exactly what they mean by "climate emergency" but in the mean time, they begin Exactly 40 years ago, scientists from 50 nations met at the First World Climate Conference (in Geneva 1979) and agreed that alarming trends for climate change made it urgently necessary to act. And that seemed odd to me, so I stopped to find and read it. First a little context; consider In the decade that ran from 1979 to 1989, we had an excellent opportunity to solve the climate crisis? Which brings me back to my ancient World Climate Conference 1979 which is me rebutting suggestions that the conference predicted cooling. Yes really. Now as it happened it didn't, but some of it can be read that way, so you can see how implausible it seemed to me that it should support urgent action.

The declaration is available online nowadays. And due to some kind of magic I don't understand, it can even be cut-n-pasted. So the declaration summary text, headlined "An Appeal to Nations", is:


Having regard to the all-pervading influence of climate on human society and on many fields of human activity and endeavour, the Conference finds that it is now urgently necessary for the nations of the world:
(a) To take full advantage of man's present knowledge of climate;
(b) To take steps to improve significantly that knowledge;
(c) To foresee and to prevent potential man-made changes in climate that might be adverse to the well-being of humanity.

Does that justify the paraphrase "agreed that alarming trends for climate change made it urgently necessary to act"? From just that brief text, it is ambiguous. The word "urgently" is certainly in there; combined with part (c) that could imply urgent action. OTOH, the text then segues off into


All countries are vulnerable to climatic variations, and developing countries, ·especially those in arid, semi-arid, or high rainfall regions, are particularly so. On the other hand, unfavourable impacts may be mitigated and positive benefits may be gained from use of available climate knowledge

which is largely meaningless boilerplate. And then:


The climates of the countries of the world are interdependent. For this reason, and in view of the increasing demand for resources by the growing world population that strives for improved living conditions, there is an urgent need for the development of a common global strategy for a greater understanding and a rational use of climate

which is rather hard to understand: quite how would we "rational"ly "use" our climate? Perhaps more interesting is:


Man today inadvertently modifies climate on a local scale and to a limited extent on a regional scale. There is serious concern that the continued expansion of man's activities on earth may cause significant extended regional and even global changes of climate. This possibility adds further urgency to the need for global co-operation to explore the possible future course of global climate and to take this new understanding into account in planning for the future development of human society.

This text seems to make it clear that whilst global climate change was one possibility they were considering, it is only a possibility; and the urgency is more to explore this matter than to take urgent action on it. Under the heading Climate and the future we find


Climate will continue to vary and to change due to natural causes. The slow cooling trend in parts of the northern hemisphere during the last few decades is similar to others of natural origin in the past, and thus whether it will continue or not is unknown.

This is pretty consistent with the state of knowledge of those times, but notice that in 1979 they are not even predicting increasing temperatures with any degree of certainty1. This is a long long way away from "alarming trends for climate change made it urgently necessary to act". Of course it continues:


Research is revealing many basic features of climatic changes of the past and is providing the basis for projections of future climate. The causes of climate variations are becoming better understood, but uncertainty exists about many of them and their relative importance. Nevertheless, we can say with some confidence that the burning of fossil fuels, deforestation, and changes of land use have increased the amount of carbon dioxide in the atmosphere by about 15 per cent during the last century and it is at present increasing by about 0.4 per cent per year. It is likely that an increase will continue in the future. Carbon dioxide plays a fundamental role in determining the temperature of the earth's atmosphere, and it appears plausible that an increased amount of carbon dioxide in the atmosphere can contribute to a gradual warming of the lower atmosphere, especially at high latitudes. Patterns of change would be likely to affect the distribution of temperature, rainfall and other meteorological parameters, but the details of the changes are still poorly understood.

Which again is entirely reasonable; given the state then, "plausible" is what they should have said about future warming; notice that there's no quantification (and future increases in CO2 are only regarded as "likely"). And then:


It is possible that some effects on a regional and global scale may be detectable before the end of this century and become significant before the middle of the next century. This time scale is similar to that required to redirect, if necessary, the operation of many aspects of the world economy, including agriculture and the production of energy. Since changes in climate may prove to be beneficial in some parts of the world and adverse in others, significant social and technological readjustments may be required.


There's a section for this. The top two are Research into the mechanisms of climate in order to clarify the relative roles of natural and anthropogenic influences and Improving the acquisition and availability of climatic data. Scientists voting for research? You astonish me. Next Application of knowledge of climate in planning, development and management... for the application of climate data in the food, water, energy and health sectors. This I think amounts to common-or-garden stuff. Study of the impacts of climatic variability and change on human activities - more study, meh.

So in the end I think the detailed text resolves the ambiguity; the urgently necessary to act paraphrase is wrong.

Many or perhaps most people have never actually bothered read any of these source documents, even though nowadays they're easy to find. Instead they rely on other people's motivated and over-excited paraphrases, because they fit the world-view they wish to promote. Lots of people seem to want to believe that scientists have known all this stuff since the 60s, or 70s, or 80s (take your pick) but that isn't true.

You might perhaps reasonably ask whether this is relevant to the Great Climate Emergency. When I've finished reading what they say, I'll let you know what I think. But given this example, I'm going to have to check all their statements and take none of it on trust.


1. As I said probably in about 2003: This isn't a prediction of warming such as you would find in the 2001 IPCC TAR, its a much weaker statement of plausiblity appropriate to the level of knowledge of those times.


* ALL THE NEWS THAT'S FIT TO PRINT IN THE NATION AND  THE GUARDIAN
Posted by William M. Connolley at 10:24 pm