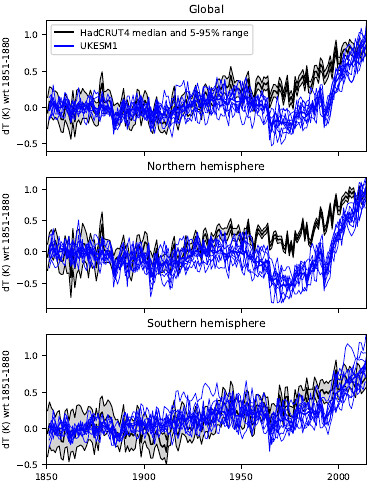 Top of my queue of stuff to blog about - yes, I really do have a queue, at least sometimes, and it isn't currently empty you lucky people - is this Twat wherein Young James opines "Key Points: UKESM1 performs well, having a stable pre-industrial state and showing good agreement with observations in a wide variety of contexts." could have been better written as "UKESM1 does a great job at everything other than its primary function". And if that seems harsh but fair, well, I'm far more interested in the accuracy than the tone. As I said in last year's appraisal interview and will doubtless say in this year's as well.

Gavin seperately but I can't believe entirely unrelatedly wrong Sensitive But Unclassified (from which I take my headline - geddit?).

So the point - in case you're so dull that you've missed it - is that UK ESM 1 rather seems to be a touch over-sensitive in its simulations of the C20C. And that just possibly that's linked to its rather higher-than-expected estimate of climate sensitivity. Which rather calls into question the credibility of said estimate of ECS. A feature it seems to share - see Gavins's post - with a number of other recent models. How to reconcile this with reality is a topic that will doubtless be explored by those rather more competent than me. Thought I did rather like this Twit: a lot of the same people who will bash this model for having a high ECS and not having a great fit to the instrumental record will, without a trace of irony, also tell you climate models are garbage bc they're tuned to match observations.

Aside: one of the things that pissed me off - particularly when I found myself writing it - was people saying that their climate model performed "well", when that was a meaningless ill-defined term running the full gamut of "it's a bit crap but let's hope no-one notices" to "oh dear".

This post brought to you by two and a half pints of "Nelson's Revenge".


* ONE MODEL, ONE VOTE
* SUFFER THE LITTLE WEASELS TO COME UNTO ME
Posted by William M. Connolley at 9:14 pm

climate models are garbage bc they're tuned to match observations.

Presumably that's specifically referring to tuning to match the instrumental surface temperature time series, because all climate models are tuned to match observations of some sort.

But technically UKESM1 has been tuned to the instrumental time series as documented in Sections 2 and 3 of Mulcahy et al. 2018. The original model configuration with best practice tuning fits to independent literature and directly relevant observations returned a net anthro aerosol forcing of -2.75W/m2 at year 2000, which suggested a total anthro forcing (with GHGs) of -0.6W/m2 at year 2000. They judged this to be incompatible with observed warming, so set out to find additional processes and modifications which would dampen the aerosol forcing, down to -1.45W/m2 in the final config.

That was all done with short time slice simulations though, just for 1850 and 2000. They didn't have visibility of how the model would simulate transiently.

Look at the past to see the future.

About 3 meters per century of sea level rise.