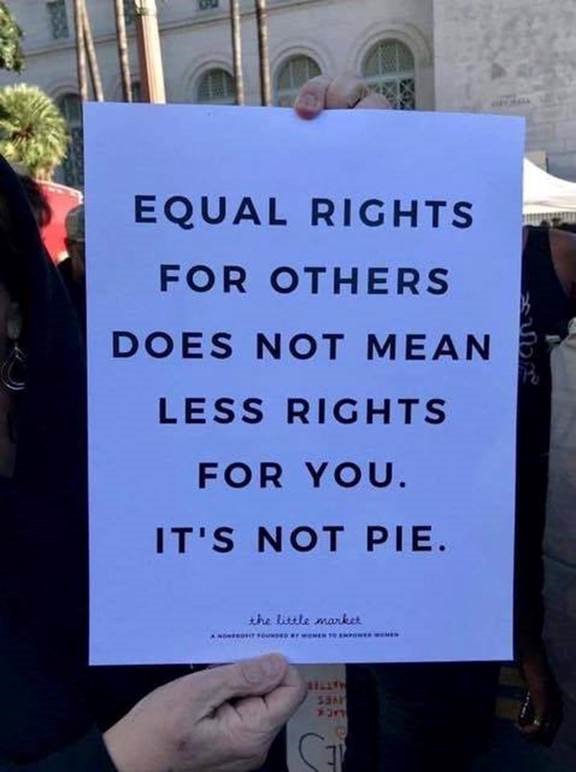 The idea that "it's not pie" and that "equal rights for others does not mean fewer rights for you" is such a commonplace that you can get it on a tee shirt.

But is it true?

In Hobbes' world, in the State of Nature we all have equal rights to all things; but we agree to give up some of those rights in order to allow Civil Society to form. And in exchange for, for example, the right to settle our own disputes by force if needed, we agree to submit to a Sovereign's adjudication of disputes: in practice, a court system.

That system inevitably involves balancing some rights against others. For example, does a baker's right to "free speech" in the form of no-forced-speech trump a gay person's right to have a cake baked for them by the bakery of their choice? The answer turned out to be in the baker's favour. Can you call the Prophet a "paedophile" because of his child marriage? Not in Austria; it would seem that religion's freedom from having unpleasant things said about it trumps free speech1. I don't think it would in the US of A. Contrariwise, the "right" to an abortion doesn't obviously involve others losing anything that could be called a right2.

Part of the answer is going to turn on what-are-(human)-rights, anyway? As I've said before, or perhaps edged towards, or avoided, I rather like Hobbes' version: rights are what you have naturally, the aim is to lose as little as possible3. That fits with the Declaration of Independence's famous We hold these truths to be self-evident, that all men are created equal, that they are endowed by their Creator with certain unalienable Rights, that among these are Life, Liberty and the pursuit of Happiness. That to secure these rights... Which says that the rights are prior; the govt does not create any more, it helps secure pre-existing rights.

[Update 2019/04: so for example the Equal Rights Amendment is bad, because it declares the existence of equality of rights. Had it, instead, declared that the state should pass no law depending on sex, it would have been good. And yes, that would permit single-sex toilets to continue, but no it wouldn't permit blanket prohibitions against women in, say, the military.


1. Religious beliefs must be subject to criticism and denial, the ECHR observed, but when statements about religions went beyond critical denial and were likely to incite religious intolerance, states could take proportionate restrictive measures, it seems. Hobbes would thoroughly approve: the sovereign may judge what opinions and doctrines are averse, who shall be allowed to speak to multitudes, and who shall examine the doctrines of all books before they are published.

2. At least, not without contortions. As I understand it (I'm talking US law here) the "right" to an abortion is founded on the "right" to privacy, which itself is founded rather weakly on the Due Process Clause. So again, there's a balance between an individual's right to privacy and personal life, against the Sovereign's "right" to maintain society.

3. An example again from the USA: your right to freedom of religion is protected by the constitution forbidding the state to make any laws about it; not by any positive legislation.


* CLIMAT DE LA PEUR.
* A Brazilian in Canada - When one person’s right is another’s obligation. How transgender rights sometimes lead to conflict - the Economist.
* UN Urged to Recognize Healthy Climate As a Human Right; or, "people who get paid loads to globetrot about human rights and the environment advocate for more gravy".
* But where do rights come from? An opinion, from CafeHayek.
* Immigration as a Civil Right by Bryan Caplan
Posted by William M. Connolley at 3:18 pm

Does this mean that, in Austria, Holocaust denial would be compulsory rather than illegal if Nazism had been elevated to the status of a religion? That leads to the question of how does one set of beliefs constitute religion while others are mere ideology. The idea the distinction requires an unevidenced supernatural being seems inadequate.

Not no laws at all related to religion; just cannot establish one.

For example, bigamy is against the law despite the early beliefs of the Mormons.

Individuals are not created with rights. They are not innate, inalienable or originate in the individual.

Rights are emergent properties that are conferred by the social context and historical contingency.

> Rights are emergent properties that are conferred by

This is another view. Or do you hold that your version is the One True Provably Correct version; if you do, where is your proof?

Also, what does your theory say about the topic of this post: whether rights for A can reduce the rights of B? Do you regard the photo as expressing a truth, an error, or does it depend on other factors?

@-"This is another view. Or do you hold that your version is the One True Provably Correct version; if you do, where is your proof?"

It is intended as a descriptive overview at the level of where and how the moral philosophy of 'Rights' originates. Proof is for axiomatic systems (and printing and liquor), while the philosophy of Rights may develop an axiomatic system, the process of evolving and changing Rights within a society is not.

@-" Do you regard the photo as expressing a truth, an error, or does it depend on other factors?"

Other factors. Extending the right to vote removed the Right of white male property owners to be the sole agency within a democtratic political governance.