How Scientists Got Climate Change So Wrong? 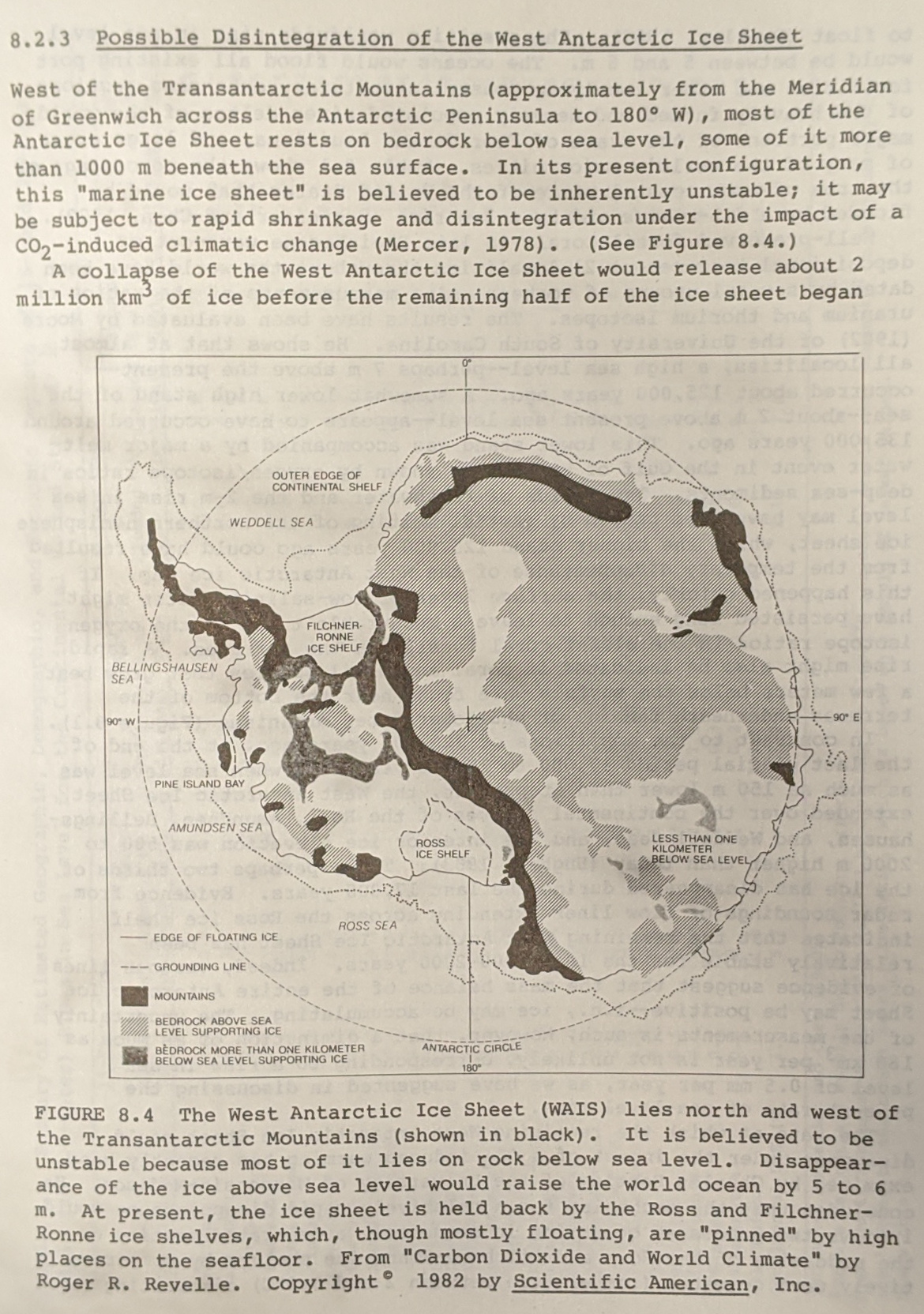 Sigh. One of my predictions from the far past (but alas if I wrote it down I failed to do so clearly) was that when people started to take GW seriously, they would switch from ignoring what the science was saying to complaining that no-one had told them what was going to happen. Today's fuckwit example of that is Eugene Linden who "has written widely about climate change" for the NYT and who provides my headline.

EL writes For decades, most scientists saw climate change as a distant prospect. We now know that thinking was wrong. But in 1996 EL wrote Scientists have assumed that any change caused by humans would occur over many decades. They are no longer so sure... If climate change brings about a large rise in sea level, the principal immediate cause will be the collapse of the West Antarctic ice sheet... and so on. 1996, for those who haven't been counting, is decades ago. So his own words prove him wrong. But all that proves is that you can't trust EL. So continuing: In 1990, the Intergovernmental Panel on Climate Change, the United Nations group of thousands of scientists representing 195 countries, said in its first report that climate change would arrive at a stately pace, that the methane-laden Arctic permafrost was not in danger of thawing, and that the Antarctic ice sheets were stable. I think this is all wrong. EL is a journo, and probably not very good at logic. IPCC '90 did not strongly predict unstately GW, it did not predict rapid permafrost thawing, it did not predict that Antarctic was definitely unstable; but I don't think it predicted the negatives of those statements as EL asserts. Perhaps he isn't very good at uncertainty; few people are.

My pic, incidentally, is not from the IPCC but from the earlier Nierenberg report which - if you believe Oreskes, which you shouldn't, she's as wrong as EL - downplayed the risks of GW.

Before going on, I should note that while EL is wrong about the past, he's wrong about the present, too. Few thought it would arrive so quickly. Now we’re facing consequences once viewed as fringe scenarios isn't really defensible either. GW is arriving at about the pace predicted; there are still room for plenty of surprises in the future but there haven't been (m)any up to now.

So, let's read the bloody SPM. For permafrost, it doesn't say a lot, but it does say Higher temperatures could increase the emissions of methane at high northern latitudes from decomposable organic matter trapped in permafrost and methane hydrates. As to Antarctica, it includes The West Antarctic Ice Sheet is of special concern. A large portion of it containing an amount of ice equivalent to about 5m of global sea level, is grounded far below sea level. There have been suggestions that a sudden outflow of ice might result from global warming and raise sea level quickly and substantially. Recent studies have shown that individual ice streams are changing rapidly on a decade to century time-scale so you can't say you weren't warned. It does continue however this is not necessarily related to climate change. Within the next century it is not likely that there will be a major outflow of ice from West Antarctica due directly to global warming. But, you're not entitled to read "not likely" as "definitely". Perhaps it would be better to look at the full report? Section 9.4.6 is Possible Instability of the West Antarctic Ice Sheet. Parts of this ice sheet are grounded far below sea level and may be very sensitive to small changes in sea level or melting rates at the base of adjacent ice shelves (e g Mercer 1978 Thomas el al 1979, Lingle 1985 Van der Veen 1986)... It is hard to make quantitative statements about this mechanism... Although much of this variability is probably not related directly to climate change it demonstrates the potential of this part of the ice sheet to react quickly to any change in boundary conditions. But then at the end, they're obliged to go back to most-probable: In summary, there is no firm evidence to suggest that the Antarctic ice sheet in general or the West Antarctic ice sheet in particular, have contributed either positively or negatively to past sea level rise On the whole, the sensitivity of Antarctica to climatic change is such that a future warming should lead to increased accumulation and thus a negative contribution to sea level change. Polar ice sheets are called out as a key area of uncertainty.

And the idea that IPCC 90 said that climate change would arrive at a stately pace is odd. You could get that impression if all you did were skim the center-line predictions, but not if you read the caveats such as we are confident that the uncertainties can be reduced by further research However, the complexity of the system means that we cannot rule out surprises.


What the EL piece shows is how bad journos like him - and by extension the political process in general - are at handling uncertainty1. Anyone old enough to be around during the discussions in those days will remember a variety of predictions, from its-all-going-to-be-fine to we're-all-doomed, with all shades in between. WAIS instability and the dangers of SLR from it were among the more plausible dangerous scenarios. But certainly in the early days it is genuinely true that the state of knowledge was only enough to warn about such things; it would have been grossly irresponsible to state that they were definite. Indeed it would be so today; actually, the early center-line predictions hold up pretty well.

There's also a section which EL missed, entitled How much confidence do we have in our predictions? which sensibly concludes with Furthermore, we must recognise that our imperfect understanding of climate processes (and corresponding ability to model them) could make us vulnerable to surprises, just as the human made ozone hole over Antarctica was entirely unpredicted In particular, the ocean circulation, changes in which are thought to have led to periods of comparatively rapid climate change at the end of the last ice age, is not well observed, understood or modelled.

All EL's stuff is obviously inconsistent with the Emergency Folks' Exactly 40 years ago, scientists from 50 nations met at the First World Climate Conference (in Geneva 1979) and agreed that alarming trends for climate change made it urgently necessary to act, but that is wrong too, so doesn't count against him.


* The Rhetoric of the Paris Agreement by Pierre Lemieux
* Duflo and Banerjee's Deficient Thinking on Incentives, Part II by David Henderson


1. Or, to be less charitable, how people will simply forget the past in order to fake up a story. 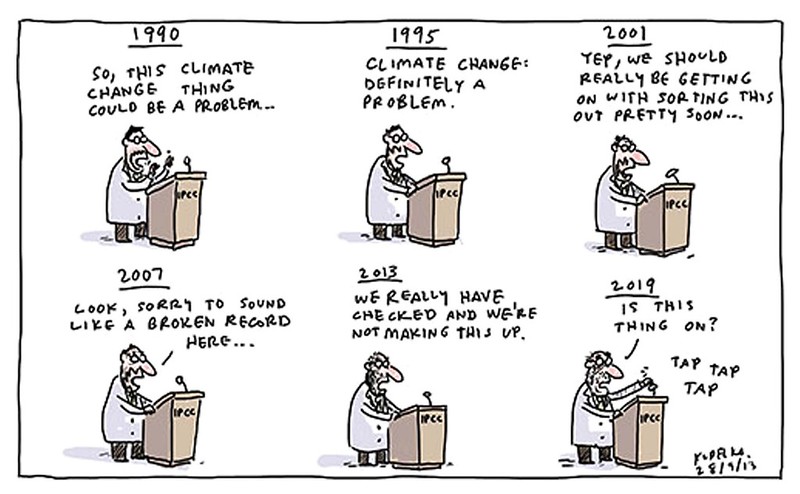 Posted by William M. Connolley at 9:46 am

I was tempted to send you a link to this.

My comment would have been that we are seeing about what was expected, perhaps less.

More than expected would have been something like the Amazon turning from forest into savana over a few decades. Or the PIG cutting the WAIS loose so most of WAIS turns into bergy bits and flooding South Florida (and other places). And makes the southern hemisphere colder for a decade or so. These things mostly have not happened. Yet.

Yes, Arctic sea ice has declined faster than predicted. Is there anything else?

Some scientists got their predictions badly wrong. Oddly enough, they are generally the few scientists whose pronouncements are considered infallible over at WUWT.

But did it sell papers?

So. EL takes another dump while his wife drops two-three-four into their prams. Go figure.

Can't wait for the rest of humanity to move into their tiny (little pink) houses ...
https://en.wikipedia.org/wiki/Tiny_house_movement

And if you believe that humanity really gives two shits then I've got a $100K tiny house to sell you, I only paid $20K so only a 400% markup. I just made that last part up (me being stupid enough to ever buy an outrageously expensive tiny house). Who in their right mind would buy an 8.5 ft wide trailer-able house that requires an F350 duelly?

Going 'so called' off grid burns more carbon than staying on grid. Must be nice to have had some money and not so nice to still be so stupid.

Let us all continue to draw up graphics of 50% GHG reductions by 2050 because it is easier said than done.

You lead them to water, they drink the water but still end up burning more carbon. /:

Whaddya mean nobody knew? I blame Britan for the industrial revolution.

I'm still baffled by the Xknew campaign, or rather, I'd like to be, because it's so obviously wrong. Mostly it's just the sort of evil PR that they pretend to oppose; but probably they've convinced themselves it's all right because they have a noble cause.

The article seems to be under the bizarre illusion that only coal industry could read coal journals; or that "If the future rate of increase continues as it is at the present, it has been predicted that, because the CO2 envelope reduces radiation, the temperature of the earth’s atmosphere will increase and that vast changes in the climates of the earth will result" came out of nowhere. Yet the journal seems to treat it as common-knowledge; there are no refs I can see. So, #govtknew and #journosknew and so on.